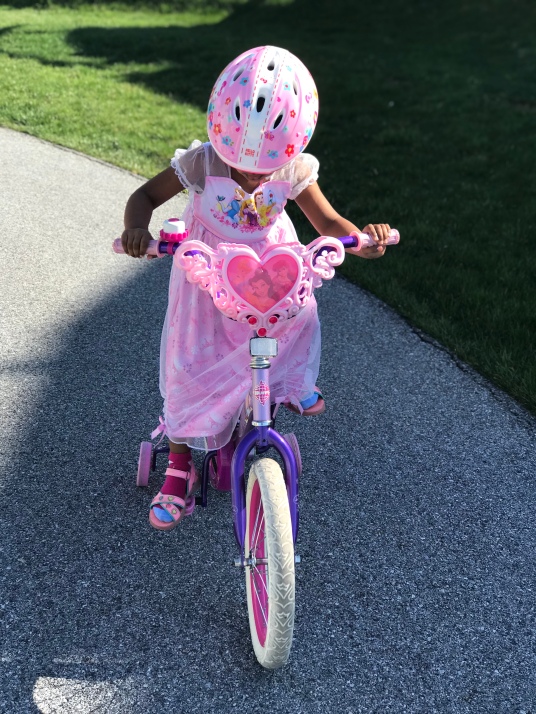 After what seemed ages, we had a sunny day today. The kind of day writers eulogize as bright, cheery, clear, warm and happy. A little after breakfast, Ammu and Pattu were nowhere to be seen. After peering through the windows to see if they were biking outside, I looked in the garage and the two sat side by side, their heads touching working on their old princess bikes. One held the training wheel while the other bolted it to the main assembly. Wordlessly I handed a wrench and showed them how to use it.

A half-hour later, Laddu strapped a helmet to her tiny head and tentatively walked to where her Akka(s) camped out. They cheered her on as I sat her on the bike. I held on to the seat and the handlebar for fear she would wobble. A few minutes later Laddu was begging me to let her go. In five minutes the three were circling around me in the driveway.

The pride and joy in all three faces are one for the memory books.

I watched as Laddu cycled behind her sisters. I watched her struggle to slow down. I watched as she fell, picked herself up and got back on. I watched with pride, with joy, and with immense trepidation.

Summer will be here shortly and I imagine our mornings and evenings will be spent biking outside the house. The little one who until last summer had trouble reaching the pedals of her tricycle will now be biking by herself.

They say the days are long and the years short. I now know what that means.