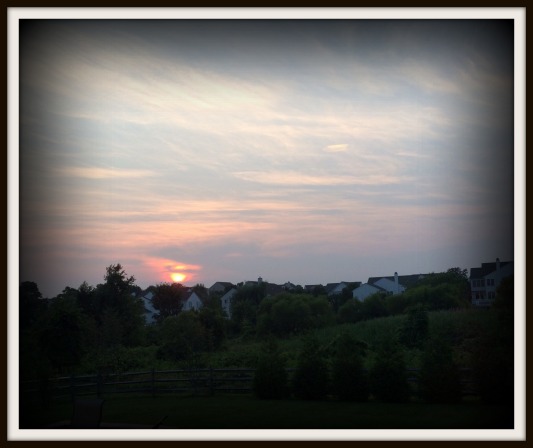 The setting sun is a ball of red in the horizon, imbuing the clouds with a haze of pink and orange. I am by the stove watching mustard dance around in the hot oil when I hear Saathi sigh. I turn to notice him watching the sun sink lower. A questioning eyebrow reveals he wanted to take the kids out for a walk. A family walk he calls it. I look at the stove and urge him to take the kids out while he can as I finish frying up the okra. They leave in a flurry of squeals and screeching tires.

In the countdown to the beginning of school, a new urgency seems to have settled on us. Saathi took the day off work to spend with the kids. They did groceries together, played with dolls and sang at the top of their voices. Today we stepped out again aimlessly stopping at the library, wandering through the mall, eating generic sandwiches and finishing it off with soft serve cones.

The house feels silent save the sizzling pan. The whole of summer stretched out before us. We took it for granted choosing to spend day upon glorious day sprawled on the floor, hooked to our phones and devices, watching late night TV and frittering away precious hours. As the hours become scarce we are visited by a sense of inevitability much like the setting sun. We cram as much as we can before bedtime on Sunday. We assuage the guilt of those missed beach trips, zoo visits, farms and fireworks by dollar store trinkets and ice-cream.

A week ago, I received my blood work results containing one aberrant value. Like any child of the IT era, I googled and convinced myself I was terminal. I saw my life flash before my eyes. I took stock of where we were and persuaded myself that the children were in good hands. I would go out in a blaze of glory I concluded promising to live it up until I could no more. The kind doctor who has tended to me for about two decades now laughed when I brought it up at the follow-up. He explained why those values meant nothing without context and assured me that I was more than OK.

In the few days, I was in a no-mans land so to speak, I felt the same sense of urgency descend on me. I was sure I wanted to cram in as much living I could do in fewer days, months, years than I would have had. I was filled with regret at the prospect of the years that stretched out languorously that I had taken for granted. The proverbial sunset was my reckoning.

Does that mean I will live out the rest of my life mindfully? Perhaps not, but I do seem to be filled with a sense of life suddenly. My next summer will be full of beaches, picnics, farm visits and walks before sunset.